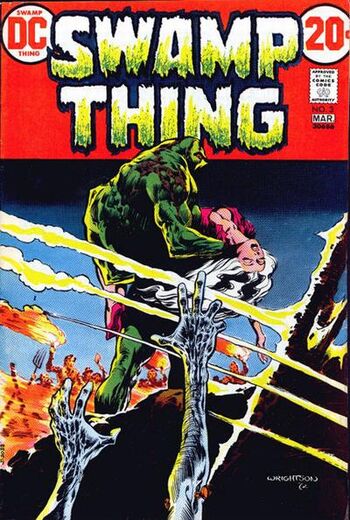 There was one thing that really, really bothered me in that horror comic trade that I talked about in the post below. I meant to mention this earlier. It was broken down into different groups of decades, '40-'50s, '60s-'70s, etc. OK, so between each section there was a text piece explaining the state of comic books in general and horror comic books specifically. Now, what bothered me? In two or three of the pieces the guy writing it kept calling Swamp Thing: Swampthing, and it was everytime too. Swampthing, Swampthing, Swampthing. I know, I know it is a little thing, and it is something that if it had been a non-comic article I would have let go. This I could not let go, not only was this a comic oriented book, it was horror comic book, and you can't even get the name of a genre defining character right? Unbelievable. End rant.

The same company has done several big books like this. I just took a volume of war comics that they did to work to read. You can look forward to my thoughts about that months, and months from now.
Posted by Travis at 9:46 AM