A quick hit I think. First, about a week ago I went to a bar called The Pub in McKinney, TX. I thought it was a pretty generic name, and made jokes like I drink The Beer, and later eat some of The Food. It was a pretty cool joint though. Me and my friends were seated at the bar, and for my lunch I had some shepherd's pie, actually made with lamb. It was pretty good if a bit on the salty side. What made this place for me though was this: they make their own pork rinds in house. They come out warm in a bog ol' brown paper bag. Get some of the Chulo hot sauce in a bowl, and dip the pork rinds in there. Oh, my goodness. The would start popping and cracking, and they tasted just terrific. I told one of my friends they were like Rice Krispies for adults. What made me laugh was about an hour later the group to my right got some pork rinds as well, and one the guys told his friends they were like Rice Krispies as well. 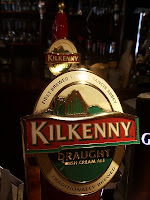 This past Friday I caught up with some friends I haven't see a looong time. My friend Little Mike had his birthday the day before, and he was going to Trinity Hall Friday afternoon to celebrate. Let's knock Trinity Hall down to begin with. I had never been there before, but it was a really cool Irish pub with a decent selection of beers on tap, and whole slew in bottles (or cans). I didn't have any of the food, but everyone who tried it said it was pretty decent food, especially for bar food.

I had two Carlsbergs myself at first. Then I tried the Kilkenny Cream Ale, which was really good. It is a nitrogenated beer, made by makers of Guinness. I give it a hearty endorsement.

Besides that it was really fun to catch up with some of those guys and gals. I've only seen Mike, Roda, and Ann about 2 times in the last 4 years. Me, Mike, and two other guys joked that the four white guys were the first ones there and on time as per usual. Some of the people I hadn't seen it 6+ years: Sean, Rodney, Sun, Tammy, Duc, other Mike (sometimes Mexican Mike, our nicknames are sometimes very direct), Winnie, Ella May, and Betty. Plus, there are always new people I've never met before. Like Sun's boyfriend Don.

It was really a trip to see Duc again after all of this time. He was perhaps one of the most wheels off, crazy assed dudes I know. In the intervening years he got married, has two kids, has a job as an office manager, and he quit smoking. Wow, for some a lot has changed.

Struggling for a title

New Year's: Well my New Year's Eve was pretty failed as my plans got canceled at about 9PM. by that point I just said "Screw it" and decided to not do anything. I still had people trying to get me to go over to their house or drive up to Winstar (a casino). Instead I just sat in front of the TV and watched a marathon of Lockup on MSNBC. I did at least stay up to midnight. I haven't before.

Karma: As some of you may or may not know I used to do volunteer work for the Hero Initiative. Well since there hasn't been a show near me that they have been at I haven't really done anything to support them lately. Well this year I decided to actually join them with a membership. I looked at the options and plunked down that money for the Bronze membership. 29 bucks, no problem. Just a few hours later I got an e-mail from the guy who runs the charity saying he was bumping me up to the Silver membership. Which I thought was very kind of him, and totally unnecessary. If you are a comic fan at all, I would highly recommend supporting them in some way. A donation, and they put out several books a year that are really fun. Like a collection of all of the Stan's Soapbox from I think 1968-1980.
Posted by Travis at 9:05 AM No comments: