Well I hope everyone had a good Thanksgiving. I know I did, not let me run down what we had for our meal. Let me stress this was for 4 people only:

I didn't even know there were 2 pumpkin pies until they gave me half of one when I left, and my step-mom said she had another. It was good though...
Posted by Travis at 10:49 AM 2 comments:

Geez, has been two weeks already? Anyways, I went to the Wolfmother concert two weeks ago. They were playing at the House of Blues in downtown Dallas. They has two bands opening up for them. thenewno2 who I had never heard of, and the Heartless Bastards who, not only had I actually heard of, but I liked. I was stoked to see them. Well I was told, that we (that being me and my friends were going to meet a a bar first), so no opening act. I was a bit disappointed, but the Filmore was a pretty cool bar to hang out at.

Well, we did make it to the House of Blues in time to catch the last 4 or 5 songs of the Heartless Bastards. My faith in them was totally rewarded. They were awesome, and my friends pretty much acquiesced that it was a mistake to miss their entire set. A couple of my friends enjoyed them so much they bought CDs and t-shirts. I was still sober enough not to buy a t-shirt there. We did miss all of thenewno2.

Then it was time for Wolfmother to take the stage. Watching them, and hearing them play is what I imagine it would have been like to see some of the great bands of the '70s. It is a no frills concert with just hard rocking music. I love that the bass player (or was it the rhythm guitarist?) is also the keyboardist. When it is time for some keyboard, he just flings his instrument around to his back and jams on the keyboard for a bit. Both bands that we saw really seemed to be into it, and seemed to be having a great time. I think that was helped by it being the first night of their American tour. It was just a great night, with pure rock and roll music.

I did find out a few things about thenewno2. They are led by the Beatles great George Harrison's son Dhani. I was wondering were they got there name from. First, I thought it may have to do with defecation. Then, maybe it was a self deprecating name in that they are the new number 2, and not number 1. Finally, I thought it may have something to do with the cult TV show The Prisoner. Yeah, it is the TV thing. Last thing, the next day my roommate (who bailed on going at the last moment) asked if I knew any of Woflmother's songs. I replied, "Well they have put out two albums, and I own both of them, so yeah I knew a few."

Posted by Travis at 9:23 AM No comments: 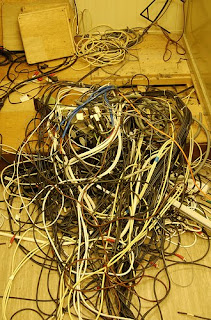 Well, I have been doing quite a bit of house sitting the past few weeks. With another bout this upcoming weekend as a friend and his wife go to Austin for the Texas Longhorns game. The only thing that happened of real significance was at my dad's place. The problem is that whenever you move something around his computer it seems like the whole set-up moves because his wires are all tangled up together. My last day there, on a Sunday, I spent about an hour untangling them, and try to clean it up.

First off, I found two lengths of wire that were not attached to anything at either end. Puzzling. Next, there was about 10-12 feet of phone line winding through the entire mess. It was plugged into a phone jack at one end of the room, but nothing around the computer. To make it all a little bit neater, I used garbage bag ties so there wasn't so much loose wires everywhere. It was all a little bit tighter. Obviously, it is still a lot of wires running around everywhere, but it is better. Please note that picture is NOT from my dad's house.

In other news of me. I have been consistently busy at work for over a week for the first time in months. Which has been great, because when it is too slow the day just crawls by. Also I have been given new responsibilities, so I have more to do in general. It has been good.

I made a mostly seamless upgrade to Windows 7 yesterday. Many thanks to my friend Dave who worked at Microsoft for a great deal on the upgrade. This version of Windows was actually very good and finding new drivers for some of the hardware on my computer once I got hooked up to the net. It took me directly to the Sound Blaster site for the driver for my sound card. Plus, it automatically installed the driver for my wireless network card. Sweet, since I had lost the installation disc.
Posted by Travis at 9:32 AM No comments:

We finally close out Wizard World Texas 2007 with:

We have Andy Kuhn's rendering of Karate Kid. What I like about this was this was done late on the last day of the con, and he still seemed to really get into it. A nicely done sketch.
Posted by Travis at 8:34 AM 2 comments: