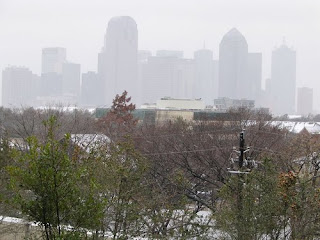 If you recall last week was Christmas. My original plan was to go to my dad's house Christmas Eve drive back home, and go back Christmas morning. Well it started snowing Christmas Eve, and it was pretty treacherous just driving to my dad's house. On one overpass a guy decided driving 15mph in the middle lane wasn;t good enough for me so he jumped into the left had lane and drive 15mph there. He almost got rear ended, and the truck swerved in front of me and ended up the right hand lane because of the ice. Everyone was okay though.

So, I did end up spending Christmas Eve at my dad's house, and I was worried where I would sleep. Well my dad got a new camping trailer and I ended up sleeping in it. The trailer has a gas trailer, and I ended up turning it down, because it got so hot in there. The main problem was the wind, it would blow so hard and shake the trailer until about 4AM.

It was pretty cool having a White Christmas. It was the first one in Dallas since 1926, and only the second one I have experienced in my life.

Christmas Day was uneventful for the most part. I spent a few hours at a neighbor's house from my old neighborhood. Such a big differnce between their house and my dad's. So many kids, grandkids, and great-grandkids there. Back at my dad's there were just four of us. After we ate Christmas dinner though, we were just sitting there, all four of us, literally staring at the wall. With the same music from like 10 hours earlier playing. The snow had cleared up by this time, so I got out of there. I can understand leaving the TV off when everyone is talking and visiting, but when no one is saying anything to each other lets turn the thing on.

A good Christmas though. I enjoyed it.
Posted by Travis at 4:36 PM 1 comment:

Well last week I was off for vacation, and I took another staycation, and lived like a hermit in my house. My enjoyment was lessened though, my roommate having training all week, so he was at home doing a class on-line. I am getting a bit stir crazy though being in Dallas all of the time. Next year I definitely want to get out of here. I haven't left the D/FW metroplex in 2 1/2 years, and I haven't left the state of Texas in 5 1/2 years. I already have tentative plans to attend STAPLE in Austin, TX in March. It is a one day comic book convention, but I hope to make a weekend of it down there, as I love Austin.

For Christmas, my step-brother is arriving tomorrow, and it should be just a small gathering at my dad's house with just four of us. My brother and his girlfriend aren't able to make it this year. I hope I can make time to visit some of my friends from the old neighborhood.

I hope everyone else has a good Christmas. Eat all ya want, you only live once.
Posted by Travis at 8:53 AM 1 comment: 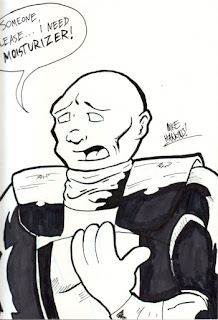 Ah in this edition we get Blok as drawn buy Mike Hankins who does a funny little web comic called Dorm Dorks. I liked that he had some fun with it.
Posted by Travis at 9:08 AM No comments: 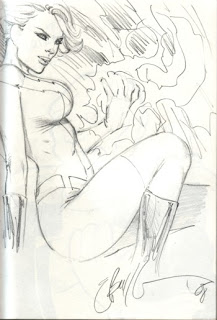 A very sexy Lightning Lass by Eric "ebas" Basaldua. Done at the the Dallas Comic-con or whatever they were calling it in '08.
Posted by Travis at 8:58 AM 1 comment:

A little sports post today. First the Texas Rangers basically let Marlon Byrd go when he declined their arbitration offer. Through a trade with the Red Sox they have replaced his bat (not his position) with Mike Lowell. Fine, whatever I just let it go. My ears do perk up though when one of the hosts on the radio is going on and on about how Mike Lowell can't possibly replace the production that Marlon Byrd gave Texas. I just had to look it up.

I mean they are almost exactly the same player and Lowell did that in 27 less games. The only major factor in the trade is Mike Lowell is 4 years older.

Another thing I want to give a hearty congratulations to the SMU Mustangs who have finally reached a bowl game for the first time in 25 years. Head coach June Jones did what no other coach has been able to do, and he did it in his second season.

I always felt that SMU was wrongly given the death penalty way back when, not so much as they didn't deserve it per se, but all of the other school who have been proven to have committed worse infractions didn't. It is greatly believed that the NCAA won't ever impose it again, after seeing how crippling it is to a school. If you remember they got a one year penalty, but had to cancel the next year as well as they couldn't get enough players to the school to field a competitive team.
Posted by Travis at 11:48 AM 2 comments: