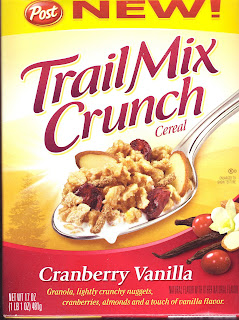 This time we delve into a new product by the Post cereal company. It is as you can see by the pic on the left, Trail Mix Crunch, cranberry vanilla flavor. This isn't a cereal I would normally get, and when I first saw it, I thought it sounded kind of disgusting. Why would I buy it then one might ask? I had a coupon for it.

Once I actually tried it though, it was pretty damn good. A lot better than I ever thought it would be. Since it was made by Post I was half expecting it to be Grape-Nuts crunchy. It was crunchy, just not that crunchy. I'm also not much of a cranberry fan, but this time it actually worked. Maybe, if I had cranberry in cereal more often i would be a bigger fan. This is definitely something I will try again.

They also have a two other flavors Raisin & Almond: which I am lukewarm about. As well as Maple Nut and Brown Sugar which appeals to me more, but I have never seen at the grocery store. I give it a very respectable 4 out of 5 bowls

I'd also like to thank Radiodad for encouraging me to do more of this.
Posted by Travis at 5:25 PM