The third sketch in my mostly legion sketchbook: 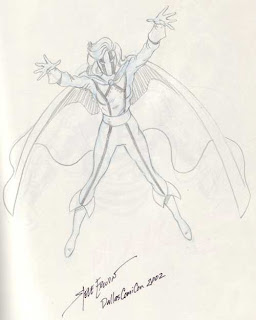 This time we have Sensor Girl as drawn by Steve Erwin. Mr Erwin is the professional I get the most nervous around.I first met him in the late '80s after he had closed out Vigilante and he and Paul Kupperberg created the first Checkmate series. I always felt he was an underrated artist, and that he would have been perfect on a high-profile series like Spider-Man, or Batman. He is real good at drawing action with the acrobatic characters. Every time I am around him I flashback to Junior High when I first met him.

If memory serves this was drawn at the con completely different from the last two. In that this show was packed. Attendance greatly boosted by the appearance of Carrie Fisher. She was on a stage behind a screen, and there was always a line to see her (naturally). The problem was that the stage was not wheelchair accessible, so she came down to see one young lady in a wheelchair, I was at a dealer's table by the stage and could have reached out and touched her (I didn't). The layout of the room was horrible as well and with the crowd you could hardly move around the aisles. I do have another sketch by him, a friend of mine had him do one of one of my own characters, that one was done on a regular size board that they draw the comics on, and my scanner isn't that big. I hope someone read the boring story and a few enjoyed the art.
Posted by Travis at 7:40 AM