And Boom Goes the Dynamite! 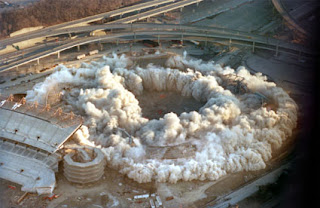 Well Sunday was the implosion on Texas Stadium, the old home of the Dallas Cowboys. I am not one to get sentimental when it comes to most old buildings (well depends on how old they are). When they tore, are they still tearing down?, Reunion Arena it didn't really bother me that much, and I spent a lot more time there than I ever did Texas Stadium. Heck, I've only been to Texas Stadium 6 times ever, and 5 of those times was within the last 7-8 years. I think it bothers me more just because historically it is more significant.

You know 5 Super Bowl champions is one thing. I loved when Brent Musburger on the old NFL Today show would say, "You're looking live at Irving, TX and Texas Stadium" It was featured on the opening of the old Dallas TV show. I liked how Tex Schramm said the hole in the roof was so that God could watch the Dallas Cowboys. And I will admit it, I liked the fact that kind of talked pissed some people off.

My favorite memory from Texas Stadium? Showing up at 7:30AM for a noon kickoff game and tailgating (IE drinking) until 11:45. Sometime during the game we lost my friend's brother for quite some time. Oh and the Cowboys won against the Lions in one of the most boring games of all-time.

The question:
What are Jerry Jone's best memories of Texas Stadium.

This deserves a WTF?
Posted by Travis at 2:17 PM