A staple for a nutritious breakfast 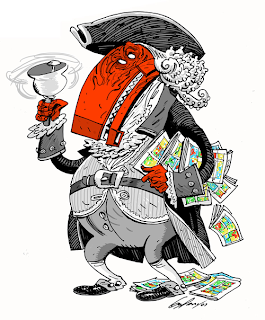 This past weekend I went to the great city of Austin, TX. One, to go the the STAPLE comic book convention which focuses on the independent comics. Two, just to get away for the weekend. It had been over 2 1/2 years since the last time I left the DFW area, and that was great. The were supposed to be a group of us going, but it ended up being just me and my friend who runs the comic book shop I go to (even his girlfriend bailed less than a week to go). Quick tangent it was going to cost more to change my room from a queen to two double beds than the hotel room would cost (we got around it by someone sleeping on the recliner).

I was running behind myself and when I showed up my friend, Jake, wanted to drop off some packages at the post office. The first one had no power so then we had to go to another one. After a few more delays we ended up leaving about an hour or more later than I had wanted to leave. A mandatory stop on a road trip to Austin is to stop either on the way there or the way back in West, Texas at Czech Stop to get some kolaches and other pastries there. They are awesome, we stopped on the way down. I had a very nutritious lunch of cream cheese kolaches and pecan rolls.

The hour delay really killed us once we hit Austin as the Friday afternoon traffic was in full effect, and Austin has grown so quickly they only have one major highway to handle it. We drove past one Ramada Inn and I told my friend, "I bet that is our hotel."
"No, man, the exit didn't Koenig on it anywhere." Which was the flaw in the directions I had, they said to exit Koenig,but the exit sign does have that name on there, it is FM 2222. Well we had to drive almost all the way through Austin at 15 MPH before I convinced my friend I was right. Eventually we made it back to hotel.

We both had a friend or two living in Austin, and what was really great was one of Jake's friends (John)lived about two miles away from the hotel. We went out that night to quite a few bars. The last one I remember (I wasn't driving) was Barflies when we pulled into the parking lot to begin with we were waved off by three police cars. We parked around the corner and went in anyways. We ended up crashing at John's house. I was lucky and got the couch. Jake slept on a hardwood floor.

Saturday, we had what was essentially brunch at a place called Ruby's BBQ. I had a brisket and sausage sandwich with slaw on it, with some home fries. It was awesome. I loved when I placed my order: The guy asked if I wanted creamy or vinegary slaw on my sandwich, and I told him creamy. He looked at me, nodded, and said "You bet you do."

Then we went to STAPLE for a few hours and it was a lot of fun. I will probably go into more details on the at the Captain Comics Board. I will say meeting Guy Davis was a pure highlight. There is also more and more female creators out there, and Monica Gallagher takes the prize for hottest person there. Oh my goodness. I bought something from her for that alone. The weirdest moment was when someone told me that "Travis" is one of his favorite names. He even mentioned how weird it was to say that to me.

We went out again that night. I was happy that my friend Larry came out with us as well, having only seen him once before in the past 15 years or so. We ended up at one club, and we were told that it was the CD release for a group. We were outside were they had the stage and the DJ ended up being one of Public Enemy's DJs which perked my ears up. He was spinning some tunes, and I was looking around and noticed there were a lot of lesbians there. It ended up being, I guess, a lesbian hip-hop duo, God-dess and She. To tell the truth, they were pretty good. I really liked what they did. God-dess was rapping and Jake asked me if the She was going to be the "hype woman" of the group. Of course I didn't know. Man, could she sing, she was great. She sang one song acapella. Later she sang one of my favorites: Michael Jackson's PYT.

I took easy that night, as I didn't want to drive home hungover, as I have done that many times before from Austin and it sucked. The rest of the night was uneventful. We left later than I wanted to Sunday as well, and I drove in the rain all the way back.
Posted by Travis at 4:39 PM