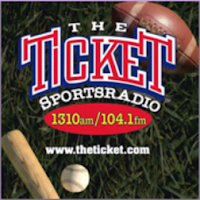 Last weekend my favorite radio station hosted their annual Ticket Stock, sometimes Ticketstock. I wasn't able to go, but what I love about it is that it is free to the fans. No admission price to get in, and no cost to get autographs from any of the celebrities that show up. They are mostly local sports stars. Like the Cowboys Tashard Choice, the Rangers David Murphy, etc. They also bring in some pretty big time guests as well. Like this year they brought Barry Sanders. He was so committed to getting here when his flight got canceled out of the city he was in (I believe Detroit). He drove himself to another city to catch a flight to Dallas, what a guy!. Now Barry Sanders' autograph was free as well, but there were a limited number of tickets that you did have to wait in line for.

The other fun part of this event is that almost all of the show hosts do a little concert together. They are collectively called the Time Wasters, and you get a nice mix of original songs, song parodies, and straight covers. Really cool, and can be really wheels off. Their backing band is one of the hosts' own band who learns all of the songs they are doing fairly quickly.

I did get to hear parts of it live on the radio. I enjoyed them trying to get Barry Sanders to admit he was better than Emmitt Smith. He refused, especially since he was in Dallas. Tashard Choice has everyone convinced for a few seconds he had just been traded to St. Louis. Good times. I hope to go next year.
Posted by Travis at 11:16 AM