This time we got: 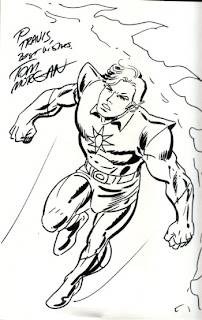 We got a Sun Boy pic by Tom Morgan. He was a very entertaining guy to listen to at the convention I met him at. He did quite abit of work for the Big Two in the '80s & '90s and just kind of disappeared from the comic book scene. He said he was getting calls all the time from artists friends saying that they could get him work on a book if he needed it. He didn't, he had moved on to a career doing storyboards for films, tv, and commercials.
Posted by Travis at 8:19 AM