Well, my friend Rob tagged me in one of them blog meme type things. It is a “best of decade” thing that hopefully I can squeeze 3 or so categories out of. From Ami Angelwing’s original blog post:

It's the "of the decade" meme! Basically come up with 3 categories and who you think wins that category! Be creative!

and tag 3-5 other ppl! And then they come up with 3 categories.. etc :] The main part is to be creative!

Be creative? That isn’t my specialty, but lets see what we can do…

Best Piece of Radio Audio of the Decade: Just go and listen to this piece of audio. The thing to remember is that this was a radio host interviewing the Dallas Chief of Police. Oh, what must have been going through his head!? I have heard this well over a hundred times and it makes me laugh every single time.

Best Sporting Event of the Decade: This decade was the second time I went to the first two rounds of the NCAA basketball tournament. The first round is four games with quite a bit of time between the first two and second two games. Between those games two friends and I were drinking at the bar in the arena. One of my friends hits on a girl there and, she offers to give us the seats of some of her family who have already left. We ended up watching the games that evening on about the 15th row. A little bit better that our seats on the last row in the arena.

Best Website of the Decade: The Captain Comics message board. One of the most civil places on the web were we discuss so much more than just comic books. I have even had the pleasure of meeting a few of the people on there. 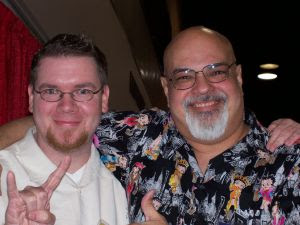 Best Comic Book Memory that has Nothing to do with Comic Books of the Decade: I don’t believe I have ever told this story on the web before. Okay, so it is the first year of Wizard World Texas in Arlington, TX (I wanna say 2003). I am volunteering at the Hero Initiative booth (still called ACTOR back then). One of the guests of honor is George Perez and he is also donating some of his time to sign comics at our booth for donations. I meet him Friday and that was very, very cool.

Saturday night a friend of mine who was their peddling his comic with some other friends was having a party at his house, and I went to that of course. We almost pulled an all-nighter, and I ended up with a solid 2 hours of sleep. I went to the con that day very tired and very hungover. I sat in the back of the booth feeling sorry for myself waiting until the time I had to go back on duty. At one point George shows up ad he looks miserable too. It turns out he had gotten mild food poisoning the night before and also felt like ass. He just wanted a place to hang out before he met more of the fans, so George Perez and I just sat in the back of the booth commiserating with each other for about an hour. That’s right kids I had just about every fan boy’s wet dream as I had a one-on-one with George Perez. I don’t remember what we talked about, but I know it had little to do with comic books

That is it that is my list. Who to tag? I reckon Howard, Jeff, and Mike. I would tag P-Cat as well but I don’t know if his serious sports blog would be up for a meme. If you are go for it as well.

PS I am trying to see how many places I can out that picture of me and George Perez. This is either 4 or 5 sites. This picture was taken a few years later though.