Who has been worse? 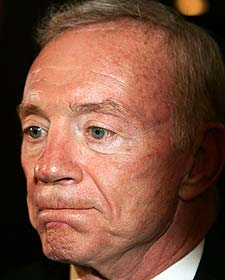 After the debacle on Sunday all of the rage around Dallas is who to put the blame on. Tony Romo or the Dallas defense? I spread it over both of them pretty evenly myself. What worries me more though is the defense. Not just this early in the season, but how they ended last season.

24-33 loss to Baltimore and surrendering 265 yards rushing. Two rushing TDs of 77 and 82 yards.
6-44 loss to Philly. Even taking out the two fumbles returned for touchdowns the defense gave up 30 points
34-21 win on Tampa Bay. They still gave up 450 yards of total offense with no sacks and no turnovers.
31-33 loss to the Giants. Another 427 yards of offense including 330 passing from Eli Manning. With another game of no sacks and no turnovers. If the defense had made one stop the Cowboys would have overcome Romo's 3 interceptions.

This is with Wade Phillips taking over the defense. If the defense doesn't get good fast the Cowboys are just going to be in a shootout each game.
Posted by Travis at 9:55 AM