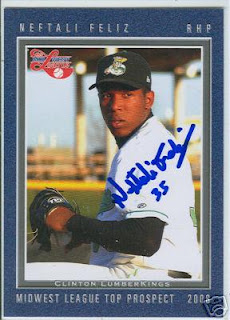 Well, for the first time sine the early to mid '90s it feels like the Texas Rangers finally have a future to look forward to. Even more so than those teams, this team has more younger players who can hopefully contribute for a longer period of time. Of course it is entirely they will never win anything, but it looks like they will be in the hunt for a little while.

The most electrifying prospect is pitcher Neftali Feliz who has taken the role of a middle reliever right now. His stuff is just awesome right now. He has a nasty slider, and changeup to accompany his 97 mph fastball.I would love to see him become a starter at some point (next season maybe?). Last time he pitched he lowered his ERA to 0.46.

Last night it was great to see Julio Borbon and Elvis Andrus bat 1-2 in the lineup (Andrus was second due to Michael Young's injury), the same slot they batted in last year when both were in AA ball in Frisco. With the continuing maturation of Ian Kinsler and Josh Hamilton it looks like the Rangers are going to have a good young hitting for a while.

The other young pitchers also seem to be adjusting to the major leagues pretty well too. Usually the Rangers call up their young pitchers to replace other injured pitchers, and they usually get shelled a few times. Then we never see them again. This year with Holland, Nippert, and Hunter they don't seem to be afraid of big league hitting. If the workhorse Millwood can remain healthy and if they do move Feliz to the starting rotation I think the Rangers have their starters for next season, and it won't matter if Brandon McCarthy is healthy or not (I am going to bet not though).

So yeah there is some hope for the present and the future
Posted by Travis at 11:22 AM