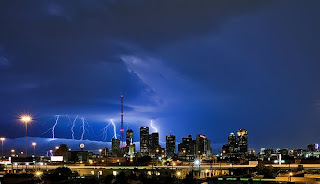 Stormy Weather: Last night and most of today we have been having some hellacious weather. Tornado sirens going off early. Me and my roommate thought we saw a fire starting from some lightning, when we drove over there we discovered it wasn't. It was just a few optical illusions fooling us. On the drive back to the house the rain was so bad you couldn't see more than maybe 10 feet in front of you.
This morning we had rolling thunder for about three hours. I love the sound of rolling thunder. It cleared up for about an hour or two, but have since had more storms come through. Wow it was awesome.

The picture to the right is by Justin Terveen who took it yesterday.

Creee-peeee: So, Friday night I am at Kotta Sushi drinking a beer at the bar. At one point this couple gets there and we chat for a bit. After a while the dude's wife leaves to go to the restroom, and this happens.
"Yeah, we just got married in May," the dude.
"Congratulations," I reply.
"Hey, when my wife comes back, tell her how gorgeous she looks."
"Uh, that's okay. I wouldn't feel comfortable with that."
"No, no. It's fine," he says.
"No, no. It isn't."
It was just so weird, and creepy having some guy I just met telling me to tell his wife how good looking she is. Especially someone who is a newlywed. Ew.

Well, excuse me: One thing that bothers me the most is when customers who owe the company I work for get mad. Well, this morning I one of those customers called me directly and irate that I had told one of his employees they were on credit hold. All I told him in response was, "What am I supposed to tell them, then?"
That seemed to piss him off even more, he said I had a bad attitude and wated to talk to my boss. When I told him that my boss would call him back in a few minutes he complains again, and again I told him, "What should I tell them?" The he said I had a real non-chalant attitude. I said the same thing again, but I wanted to say,"Well, this attitude is a defensive mechanism to keep me from telling you, To go fuck yourself." Which, it really, really is. I have been known to go off on customers before, so I was trying ahrd to keep myself in check.
My boss did smooth things over later, of course everyone's opinion here is if he paid in a timely matter it wouldn't ever have to come up.
Posted by Travis at 11:00 AM