What the L am I doing here? 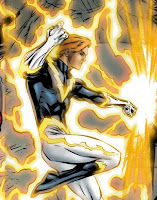 Over at Kalinara's site she has a meme on comic book characters based around a letter. I figured I would get in on this, and I got the letter "L". If you would like to participate let me know and I will give you a letter. You aren't restricted to comic book characters, any fictional one will do. So without further ado, lets get started:


1. Lightning Lad: If you know me, you know I am a fan of the Legion of Super-Heroes. It should come as no surprise then that I would work one them into my list. Garth is on of my favorite characters, and as a founding member of the Legion really has a special place for me.

I think he has one of the best background in the 30th century. The relationship with his his super-heroic sister is interesting. Add into the mix that he comes from a race of people were almost everyone has a twin, and his older brother is one of the few without a twin. His brother also has lightning powers, but has turned evil. On top of that, his brother is one of the leaders of the Legion of Super-Villains (in some versions of the Legion anyway). Wow he has a lot going on, and a ton to explore.

2. Luke Cage: One of my favorite series from back in the day is Power Man & Iron Fist. Yet, I didn't really care for Luke Cage then. I loved Iron Fist, and I liked Misty Knight and Colleen Wing than Luke. It was until the series Alias, and his relationship with Jessica Jones that I thought he became three dimensional, and a likable character. It is rare that my opinion on a character changes into a positive one, but it certainly did this time. I have also been reading some old PM&IF and I have been having a new appreciation for the character. 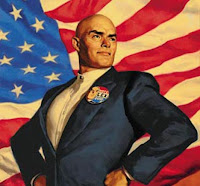 hor: How can you have the letter "L" and not do something Superman related? Well one of the best villains of all time make my list. With a character as old as Lex you get someone who is a lot more complex. He has been known to show a compassionate side, and he is not all-evil all the time (see the Joker). I didn't likeLex much when I was younger, he just seemed so lame. It wasn't until the reboot that I liked him.

What makes him a great villain is that he can't go toe toe with Superman. Superman just can't come in a beat him up, he has to outwit Lex many times, and I think that is what upsets Lex the most. Not only can he not compete with physically, but he outmaneuvers Lex's plans too. Now isn't able to pin anything directly to Luthor, but he is taken d 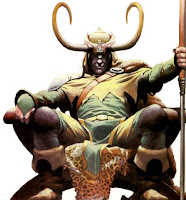 own a peg or two. Of course now he is running around in a power suit again and that lessens him in my eyes. Lex shouldn't be fighting he should be scheming.

4. Loki: Now this is just another great villain. He is a villain I can enjoy without his arch nemesis. Hell I usually enjoy him more when he is not dealing with that moron Thor. What makes him great? He is the master of obfuscation. He is so good at hiding his plans, and that he is the one pulling the strings, for a time. Then his hubris gets in the way. He just can't help himself from making a grand entrance and letting you know he is the one responsible for your downfall. Plus out of the people on my list, he has the coolest costume.

5. Leonardo: Not that he is my favorite ninja turtle, but the turtles themselves do play a part in my personal comic book history:

When I first started collecting comic books I ordered from a company in . Each month

they sent a list of comic books you could order and with that list they also had a 1 to 2 page newsletter with it. In that first newsletter I got there was a blurb about the Teenage Mutant Ninga Turtles series, and how "hot" it was at the time. I placed an order for thext upcoming issue (number 4 for those keeping score). This was my introduction to the whole independent scene. It really opened my eyes that there comics to be read beyond Marvel and DC, and they were good!

Back to Leo though, he wasn't my favorite, but I always admired him. As leader of the group he had to put up with a lot of crap from the others, especially Raphael. He was the one who was the most dedicated mastering his ninjitsu. I haven't read the title in forever, but I loved it when I did.