Another sketch for you folks: 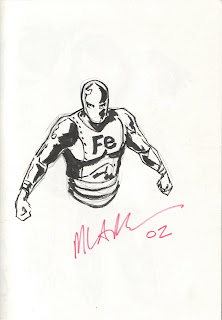 This is of course Ferro Lad of the legion as rendered by the great Michael Lark. Probably best known for Gotham Central and his current run on Daredevil. This was done at the same con as the Steve Erwin sketch. I've had the pleasure of talking with Mr. Lark several times. Including when he has done sketches at the Hero Initiative booth at Wizard World Texas. He has also taken Hero Initiative collection cans to his own table to collect money there as well. He couldn't be a nicer guy.

I think the rivets on the costume is what makes the drawing. Michael's comment when he was done, "How ridiculous he has the symbol for iron on his chest. " That's the legion!
Posted by Travis at 9:18 PM