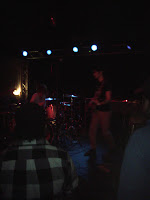 Last week, I made it to yet another concert. Wednesday night Eli "Paperboy" Reed and the True Loves made down here. I was pretty excited since he is either in the Northeast or touring in Europe. He swung through Dallas on the way to SXSW in Austin.

The concert was at a tiny venue called the Loft (it is in the same complex were I saw the Sharon Jones and the Dap-Kings concert last year), and there were I would guess between 100-200 people there. It was kind of a weird concert, let me put it into these terms

It would have been like if Dream Theater and The Dead Kennedys were opening up for James Brown. That is how different the three styles were between the bands.

First up was Lite, a prog rock band from Japan. Which I called in my head when I first saw them. Japan seems to embrace a lot of different music genres. They were on their 51st gig in a row, and they still brought the energy. They were really good , and all of their songs were instrumentals. The drummer was just insane, and a lot of times he was doing some head banging even when he was doing nothing else. They had a keyboard that had some pieces programmed into it for some songs. Other times the rhythm guitarist would play the keyboard. Good hard rocking music.

Next up we have Mike Watt & the Missing Men. Mike Watt is a punk rock legend. I wasn't sure who he was really, but then I remembered him from the Minutemen. Really I am awful recalling member's names in bands. It was funny when Mike Watt first walked in all I saw was a man in his 50s with a cane and knee brace and two minutes later he is up on stage getting rid for his set. 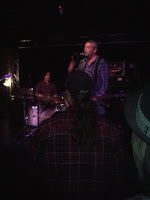 It was interesting that the drummer from Lite and the Missing Men shared a drum kit. The latter drummer just removed some of the pieces for a smaller kit, and then he went to town. It was a classic punk line-up of guitar, bass, and drums. It was also the part were I don't think I;ve heard the f-word said more during a shorter period of time. There was a short I believe in Mike's microphone and he kept getting shocked by it. Every time it happened he dropped an f-bomb, in addition to the ones that came naturally in the songs. Afterward I went to shake Mike Watt's hand and tell him how much I enjoyed it, and we shared a black guy hug. Pretty cool actually. 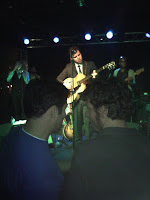 Finally, we got to the main attraction with Eli "Paperboy" Reed and the True Loves. They are really good, and can rock it. Eli has a lot of charisma on stage, and knows how to work the crowd. I did feel bad for him in that he broke a string on both of the guitars he brought, and they are such a small operation he didn't have any roadies to fix either of them. He did try to fix one offstage at one point but couldn't do it. He came back and apologized. They were still really good. I loved the drummer of the True Loves as well, he always had this big ol' smile on his face. Seemed to be having a really good time.

It was a high energy concert all around, and I enjoyed all three acts. I wouldn't mind seeing any of them again.
Posted by Travis at 9:25 AM