No I got them all cut! 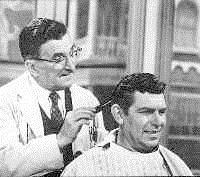 Last week, I finally got my hair cut after a little bit over two months. It is still weird for me that Marion, my stylist for about 25 years no longer cuts it. Even after 3 years or so later. I just thought it was silly for me to pay those prices to get my hair cut, and drive about an hour out of my way to do so. On the other hand, it also made me leery to have anyone else cut my hair. Which explains the one time I went over 4 months, and that was definitely the shaggiest I ever looked. I did go though, as I finally know what I want for the most part, and they keep notes. Before I would just tell Marion to cut it short, and let her go to work. No muss, no fuss, and I would be in and out in fifteen minutes.

The young lady who cut my hair this time I actually liked in that she actually taught me some things. At one point she was asked me if I wanted it "square or round." I asked her what she was talking about, and she told me the back of my hair. I let her know that I had never been asked that question before. Apparently a square look is a men's look. Some men want a rounded back, but it is considered more feminine. I really didn't care, because I never look back there. She cut it square since mine was pretty naturally square, and it looks cleaner that way and will grow out better.

I explained that a lot of the terms used and such are foreign to me with my previous years with Marion. She said she tries to teach her clients what to ask for, and to use the terms the hairstylist will use. That way everyone is on the same page when the cutting goes down. Just for when her clients move, or if she ends up moving away.

I like the was my hair ended up, and I asked her to take a lot off the top, and by gum she did. I was shocked how much she took, but I like it. Now I can wait two more months.
Posted by Travis at 12:02 PM