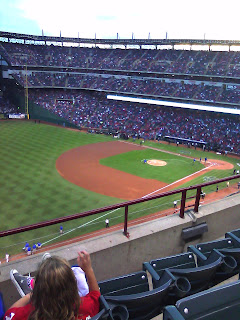 Well boys and girls I actually got to go see Game 5 of the World Series on Monday. How did I get to go? Well, back during Game 1 me and some buddies were watching the game, and the they asked me then if I wanted go in with some tickets with them. I had just gotten four new tires, an alignment, and brake pads installed on my car, so spending almost $500 for a World Series ticket wasn't in the cards for me. I regretfully declined. Monday rolls around and my boss, who had bought a ticket wasn't feeling well. About 1:30-2:00 in the afternoon he just asks,"If I don't go to the game, do you want my ticket? It's already paid for." Of course I would, so that is how I got to go. Or as I said at the time, "I just fell ass backwards into a ticket."

The actual game? I don't know what I can really say about it. It was an awesome experience. Charlie Pride sang the national anthem, with fireworks and a fly over. I don't care how old you are, the fly over is cool. Another really neat thing was having the the upper part of the stadium chant "Texas!" and the bottom part "Rangers!" and it sounded great in the stadium, and people have told me it sounded like an international soccer game on the TV.

Cliff Lee and Tim Lincecum both pitched great games. Lee had one bad inning, and according to Benjie Molina it was because Lee didn't want to pitch around Renteria to get to Rowand who could barely get on the field. Lincecum was just phenomenal. One of my friends just looked at me as the Rangers went down in short order, and I said,"Yeah, Lincecum is still good." 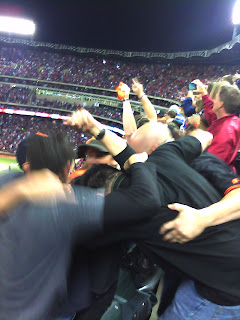 I had a whole slew of Giants' fans in front and to the right of me. They weren't annoying or anything, and were pretty cool. One even shook my hand and wished me good luck during the ninth. The Rangers lost of course, and the fans around me all just got in a group hug and jumped up and down. In the end it was a great season, and the Rangers overachieved this season. I do realize it is possible this was a once in a lifetime possibility, so I just wanted to enjoy the moment. There are no guarantees in sports, and especially baseball. The Rangers may never get back in my lifetime, and I am so glad I got to go.

P.P.S. A picture from my other blog where you can see me at the game. That blog gets updated more often as it is less text intensive.
Posted by Travis at 2:17 PM