First Concert (of the year) 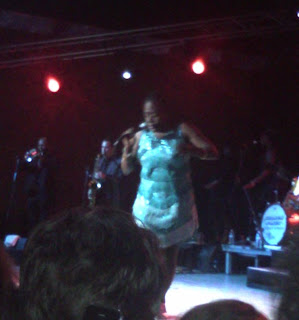 #1: I believe it was three weeks ago that on a spur of the moment decision I went to the Sharon Jones and the Dap-Kings concert. I didn't even know they were playing until the night before, and made my decision to go about 2 hours before showtime. I called one friend who I thought would be interested, but he was unable to go due to a prior commitment. No worries, I'm not afraid to fly solo. The show was at the Palladium Showroom. The Palladium has two different places for shows: the Ballroom and the Showroom. This one was at the Palladium Showroom which is the smaller of the two.

The show was supposed to "start" at 7:30. Now I'm not naïve enough to actually think the concert will start then, but I do expect the doors to be open. They weren't, and the doors to the place are down a long 4 foot wide tunnel surrounded by brick walls. Brick walls that had been taking the Texas sun all day. It was almost a 30 minute wait to get inside and the heat was brutal.

Now I had never seen a picture of Binky Griptite of the Dap-Kings, but once I saw this dude come out in a maroon suit with a fedora cocked on the side of his head, I knew exactly who it was. I was right. The Dap-Kings sang a few songs by themselves before Sharon Jones came out.

Binky played up to the crowd a bit with,"You know I've been in Texas for two days now, and I ain't heard no one say 'yee-ha', so how is everyone out here tonight?" With the crowd giving a resounding "YEE-HA!" Including me. 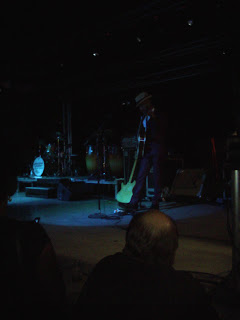 Once Sharon Jones did come out the energy just amped up. She is just so enthusiastic. I told one of my friends that I hope to have her energy when I am her age, but I don't even have that level now. During a couple of different songs she brought people up on the stage with her. I was literally 3 feet from the stage, and it was electric. Smaller venues like that really do it for me.

PS Within 5 seconds of Sharon Jones appearing on the stage I could smell the weed.
Posted by Travis at 12:33 PM

Labels: concert, Grace Potter and the Nocturnals, music, Sharon Jones and the Dap-Kings