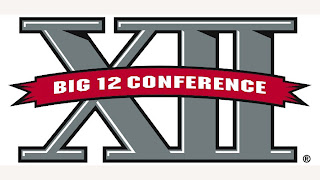 With Nebraska bolting for the Big 10, and Colorado not waiting around to see what they rest of the conference does going to the Pac-10 it looks like the days of the Big 12 is numbered. It looks the rest of the south division sans Baylor will also join the Pac-10, making the first super conference. There are some people grousing about the loss of the conference, and I just don't feel it. It isn't like when the Southwest Conference folded. That had a lot more years of tradition, and it was the one I grew up with. That made me sad, this, not so much.

Another complaint I hear about is the loss of some rivalries. Well the formation of the Big 12 initially killed one of my favorite rivalries in college football. OU-Nebraska. The had legendary games until the Big 12 came about, and they no longer played each other every since they weren't in the same division. Speaking of the north division this new conference just seems to be replacing the north division with 8 teams from the Pac-10. That makes it such a much better conference that it was previously. Oregon, USC, and Cal is so much more appealing than Iowa State, Kansas State, and yes even Nebraska who hasn't been good in years. Where would you rather watch games at?

It will also let some of the B-list schools recruit better players. Like allow Texas Tech and Oklahoma State get some of the California players. And vice versa it lets Arizona State and Washington have a better chance at Texas players.

A question, now that the Big 10 is going to add nebraska are they now the Big 12? Will they stupidly keep the Big 10 name? Will they have to pick something besides the Big 12 if that is a trademarked name?

What happens to the teams left out? Where does Baylor go? Or Kansas? Etc.

I just heard on the radio that the acrimony towards Missouri was so bad when they made an overture to the Big 10, they were almost kicked out of the Big 12. They started it, but weren't able to finish it.

Wow, this stuff is happening fast and furious. It is fascinating.
Posted by Travis at 9:14 AM