Can I Keep My Jersey? 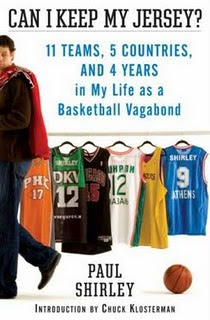 I recently finished reading Paul Shirley’s Can I Keep My Jersey? It details 4 years in his life as a “basketball vagabond”. I enjoyed quite a bit for the most part. His writing has a very appealing quality. At points you really feel sorry for Paul. The endless travels in lesser leagues made me feel weary after reading about it. The horrible hotel rooms he stayed in doing an EA Sports basketball tour, and the room he had when he played in Russia with a bed that consisted of a mattress on the floor. It really is an emotional roller coaster.

One of my problems with the book though, is that a lot of the time he isn’t a sympathetic person. He recognizes that fact, but it doesn’t endear you to him either. It got tiresome reading about him trying not to laugh at his teammates who were religious. You may not have the same beliefs as them, but to constantly ridicule them behind their back was pretty uncool.

My biggest problem with him though, was his constant grousing of people not speaking English whenever he was playing in Europe. Apparently he did make some attempts to learn the language, but since there were a lot of obstacles in communication, it seems like he could have tried harder. When he was playing in Spain, he complained about how the Spaniards put canned tuna on everything. Well I sure as hell would have learned how to say “no tuna” in Catalan, but apparently he never did. By his third time in Europe when was playing in Russia and was still bellyaching about no English, I wanted to pull my hair out. Speaking of Russia, he also complained about how cold it was in the city he played in, Kazan. No crap dude, its Russia.

Not to totally rail on the guy. There were also plenty of times I felt bad for him. How he is literally unable to have a normal relationship with a woman. When he leads such a transient lifestyle were he is taking buses to play games in Mexico, and then he might get a 10 day contract in Chicago, followed by a couple of months in Europe it makes it impossible to start a stable relationship. You feel his pain when he laments meeting a girl that he is certain he could have had some sort of long term deal with.

I was excited for him when he went to the Bulls and they agree to a contract until the end of the season. I was also crushed when he got a season ending injury there before signing that contract. That was one more thing that was bothersome. He seemed to get injured a lot. Its hard to get a professional career on track if you are constantly sitting on the bench injured. He just never seemed to be injury free at any place of the decent places he played except for his time with the Suns. Of course he barely got to play with them at all, as he was at the very end of the bench. 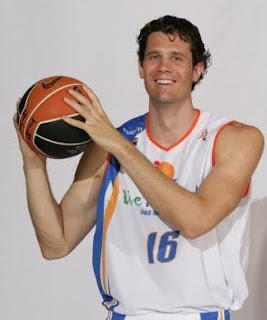 Further, I liked how matter of fact he was about the people he played with (he didn’t like most of them), his coaches, the trainers, and I really liked his relationship with his agent. His agent, Keith Glass, was brutally honest with him, telling Paul from the beginning he may never get to the NBA. That was refreshingly honest.

It was certainly educational as well. Seeing how the tryouts worked in the NBA, and it was a lesson in how hard it was to make a team. The rules they have in the European basketball leagues. Like no more than 2

Americans per team, and they way the teams get around it. Fascinating reading. I do wonder if his openness about the NBA shut the door on his future there. It is possible, or maybe teams just weren’t that impressed with his brand of ball playing. He hasn’t played in the NBA since the 2005 season with the Phoenix Suns. Maybe they tired of his arrogance. I know I did. It was wearing me out about him talking about all of the “white trash” and such. I wanted to yell at him, “You are from Merdian, Kansas! You aren’t from some cultural mecca!”

The book is a stellar read. I highly recommend it for any sports fan. It has been often compared to Jim Bouton’s Ball Four.
Posted by Travis at 12:08 PM