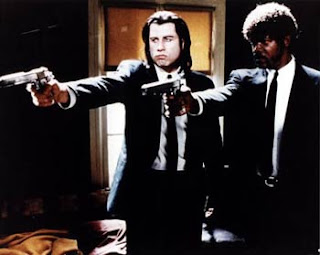 Over at Rob's blog, he did a post on who he gives a free pass to. Those who could piss in his soup, and he would have seconds from, or something like that,. Actually, it is people who have entertained you so much, they get a pass on their lesser works. Here are mine:

Quentin Tarantino: I loved Reservoir Dogs and Pulp Fiction, so much I will pretty much watch anything he does. I even watched the episode of All-American Girl he guest starred in.

Jimmy Page & Robert Plant: Simply for their previous work in Led Zeppelin. I liked the Coverdale/Page album, and when Jimmy Page was playing with the Black Crowes. Also, Plant's CD with Allison Krauss was great. John Paul Jones gets a lot less press (or none at all), but if I knew what he was up to I would check that out as well.

Geoff Johns: I don't think anyone does pure superhero fare better than Johns right now. I wanted to hate his run on Flash, and I loved it. I went into Green Lantern: Rebirth with great skepticism and he won me over. His run on the two Justice Society of America series' is some of the best comics of the past decade. All of that is so great I can forgive his Avengers.

Ed Brubaker: At one point he was writing my enitre pull list from Marvel: Captain America, Daredevil, Iron Fist, and Criminal. Only his leaving Iron Fist changed that.
Posted by Travis at 11:36 AM