It was memorable at least.

Christmas eve was when my dad and step-mom's flight was scheduled to come in. I keep checking its scheduled arrival. The time keep getting pushed further back and back and back. I lay on the couch and try see what is on the tube. My dad only gets the local stations, and one of them is having an Andy Griffith Show marathon. I am watching one particular episode, and the guest star looks and sounds so familiar. Yet, I can't place were I know him from. It is driving me insane as I just can't figure it out. Naturally, I have to wait for the credits to see if i can recognize the name. When the credits roll it is James Best. Of course: 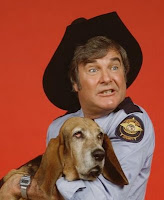 Rosco P. Coltrane from the Dukes of Hazzard. That was it!

The flight originally scheduled to come in at 10:50PM finally has its arrival at 12:35AM Christmas Day. Well three days after the original flight as well. I passed by 2 accidents on the way to the airport. I found it cruel and unusual punishment that we had to wait so long for the luggage after all of these people got snowed in at Seattle and then sat on the runway for and hour and half that they then had to wait for so long for their luggage. We finally got back the house at about 2AM. At least they got back.

Christmas morning comes along we have breakfast. We decide what to do for dinner. There is some leftover ham from Thanksgiving, so Jenny makes a casserole out of that, some taters, cream peas, and a pear-blackberry crisp. Considering she wasn't able to go to the store and do any shopping and that was what was just lying around the house I think she did an awesome job. It was a most excellent meal.

I also had a friend of mine call me several times to see if I wanted to go play poker Christmas night at another friend's house. I finally agreed with the condition I could sleep there. (No drinking and driving). Initially, though I told her I didn't think Jesus would appreciate gambling on his birthday (Sacrilegious humor, gotta love it). The next day, on further reflection: the group I play with does not celebrate Christmas for the most part. I did win though!
Posted by Travis at 9:35 AM