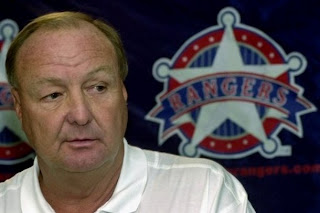 Dateline Arlignton: Well last week the auction of the Rangers finally came off, and in the end I didn't care who ended up owning them as long as Tom Hicks didn't any more. In the end the Ryan/Greenberg group won the auction after like 15 hours from Mark Cuban and his team. Remember the important part: no more Tom Hicks. After losing his shirt in so many other ventures I am just glad to see him go. I got tired of hearing how good the concession sales were at the end of the year, but merchandising was down at the end of the season address. The fans don't care; we want to know what you are going to do to make the team better. This new group has already talked about it. The day after the auction Greenberg was on the radio talking about how they are going to really go after Cliff Lee (oh thank you). Resigning Josh Hamilton, etc. With Hicks as owner, for the past several seasons, the payroll was always going to be the same as the year before or lower. The Rangers are a top 5 market team with a bottom 5 market salary. All you need to know about Tom Hicks as an owner of a sports franchise is this: Hicks also owns the Dallas Stars, and he said the worst thing that happened to them was they won the Stanley Cup. What a penny-pinching jerk.

One thing that did bother me about the auction was afterwards Mark Cuban said he did what he came there to do. Didn't he go there to win the franchise? He didn't, and if he did what he planned to do what was that? To drive up the price of the franchise? For what purpose? Some accuse him of driving up the price since he actually own some of the Rangers' debt. Yet, he owns such a small portion he spent more on his lawyers on this than what he will make from the owning the debt. I just wonder what it was.

A final thing about the sale that worries me is GM John Daniels. There is a clause in his contract that allows him to leave if the Rangers change ownership. A bunch of people think he might bolt to the Mets the team of his childhood. Hell for the Mark Teixeira trade alone he should get like 10 years of immunity.

Quick bonus: Congratulations to the great Norm Hitzges, who today is celebrating his 35th

year of doing sports radio in Dallas. He has hosted numerous shows, worked for ESPN, and has worked for just about every pro team in the are outside of the Dallas Stars. That is a good long while, a true icon around here.
Posted by Travis at 1:57 PM